History of the Pilgrimage 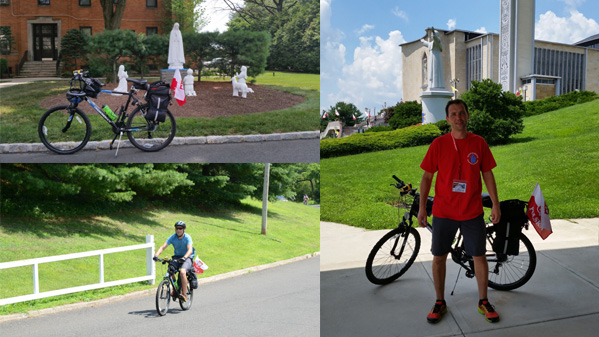 The idea to create a Bicycle Pilgrimage was born in my mind in 2014. When my dad fell ill with cancer in 2015, I promised God that I would organize a large, interstate bicycle pilgrimage. So I left alone this year, bringing my intention with me, asking God for the protection of my sick dad.

I left my parish Most Sacred Heart of Jesus Church, Wallington, NJ, July 18, 2015. I asked the priest for a blessing and went on a two-day pilgrimage. I carried all the equipment on the bike, I prayed the Rosary, I prayed, just as we do today.

On the second day I joined the group of cyclists from Manville and together with them I got to American Czestochowa on 19 July 2015. My dad left for the Lord on Saint Krzysztof's day, he did not suffer a single hour, suffering from cancer for 40 days.

And with God's help in 2016, I organized the 3-day First Interstate Cycling Pilgrimage, I did not think then that in three years the pilgrimage will cover 5 states and will last 7 days 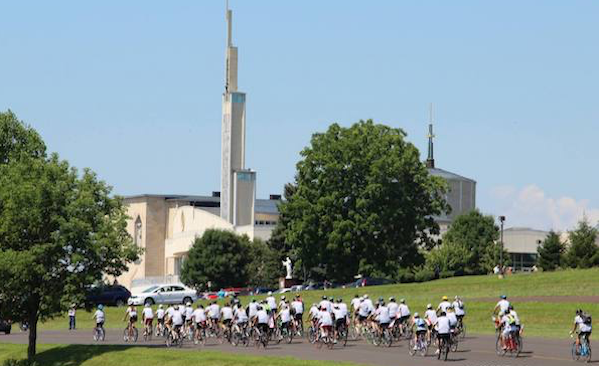 Despite the great heat in which we had to overcome the route of this year's pilgrimage, we got tired of our Lady but extremely happy!
It was the first interstate pilgrimage, the most persistent covered the route for 3 days. 13 people and 1 volunteer left Stamford CT, 15 people and 3 volunteers left Brookyn NY, 14 people and 3 volunteers left Rochelle Park NJ. In total, there were 49 of us, 25 women and 22 men and two priests: Fr. Piotr Koziolkiewicz and Fr. Pawel Dolinski. On the last day we joined the pilgrims from Manville.

To get there, they spent three days on bicycle saddles (15-17 July 2016). Although they are not competitive cyclists or enthusiasts of extreme experiences - they have covered 131 miles (210km). Tired but extremely happy, they reached American Czestochowa, a place of worship for Marian Polonia of America, which is located near Doylestown, Pennsylvania. And there, the hosts were waiting for them - Pauline fathers. Congratulating perseverance, they accepted prayer intentions - personal and parish ones, but also those entrusted to cyclists encountered on the pilgrimage route, hospitable benefactors. 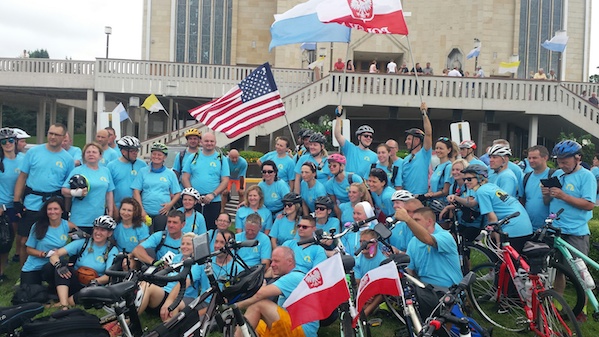 Nearly 90 people took part in this year's Interstate Bicycle Pilgrimage to American Częstochowa in Doylestown, Pennsylvania - the spiritual capital of Polonia. Everyone carried their personal intentions, requests and thanks in their hearts.
"Despite the heat, humidity and rain, we managed to overcome the route of this year's pilgrimage. Tired but extremely happy, we've reached Our Lady, "said Bogusław Gawęda, initiator and organizer of the II Interstate Bicycle Pilgrimage under the slogan" Faithful in Faith on Bike ".
The pilgrimage took place from July 21 to July 23. It was attended by 89 people - 44 women and 45 men, including 66 cyclists, 8 volunteers, 2 clergy (Father Wojciech Waligórski and Sister Maria Dziuban) and 13 people as a musical diaconate.
On the first day, bicycle pilgrims set off from two parishes, from Stamford, Connecticut (22 people) and Brooklyn, New York (25 people). At the agreed time, they met on the Washington Bridge, then headed toward Rochelle Park in New Jersey. On Saturday, they were joined by pilgrims from the parish in Rochelle Park (19 people) and they went to Three Bridges in New Jersey.
On Sunday, the pilgrimage made the final leg of the route, from the church in Three Bridges to American Czestochowa in Doylestown, Pennsylvania.
Cyclists had to overcome in the first stage: Stamford - Rochelle Park (47 miles); Brooklyn - Rochelle Park (32 miles), in the second: Rochelle Park - Three Bridges (55 miles) and third Three Bridges - Doylestown (32 miles).
The most persistent traveled 134 miles for 3 days. Everyone reached their destination safely.
The expedition required participants to have a spirit of renunciation and sacrifice. During rest and meal stops, pilgrims always found time to pray.
The culmination of the pilgrimage was a thanksgiving mass at the National Shrine of Our Lady of Częstochowa under the leadership of father Bartłomiej Marciniak, during which its participants asked for intercession and protection in various intentions. Finally, the pilgrims had dinner together. Many have already declared that next year they will take the trouble of cycling.
(Polskie Radio NYC) 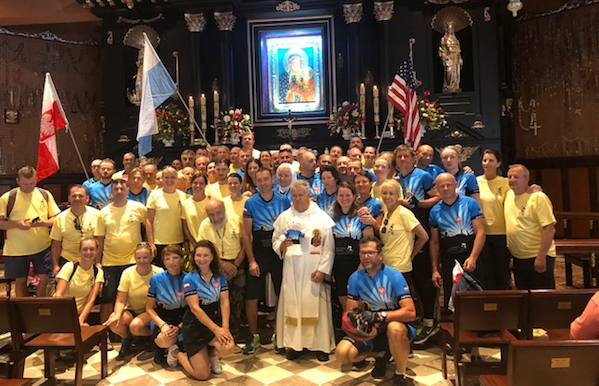 On July 16, pilgrims on bicycles set off from Boston for the third time. The goal of the bicycle pilgrimage "Faithful in Faith on Bike" was to reach American Czestochowa. The route totaled 350 miles (560 km).

The organizer and originator of the action is Bogusław Gawęda. The idea of ​​organizing a bicycle pilgrimage was born in his head in 2014, when his father fell ill with cancer, and he, carrying the intention and asking God to look after his sick dad, went to American Częstochowa. Bogusław's father died on St. Christopher, he hated not an hour, and his son introduced a budding plan to regularly organize bicycle pilgrimages in life.

49 participants took part in the first edition of the bicycle pilgrimage 'Faithful in the Faith on a Bike', the next 89 (it concerns not only cyclists, but also volunteers). What did the 3rd edition bring? 63 cyclists, including 5 priests. Seven volunteers came to help - 70 people in total. Although the attendance was slightly lower compared to last year, there is still growing interest in the event.

This year's result may also be the result of unfavorable weather forecasts - the whole week in which the pilgrim was organized was to be rainy. Of the 80 cyclists registered for the event, 58 set off. However, God's Providence watched over them and on the day of departure they rode warmed by the rays of the sun and took a trip under a cloudless sky. The rain was only on Tuesday and the last two days, which did not cool the enthusiasm of cyclists. - In my opinion, there was a charm in riding in the rain in such a wonderful group of pilgrims - says the organizer.

This year, for the first time, pilgrims started from Boston. As it turns out, there are many faithful cycling enthusiasts there - 21 cyclists set off from there, including 4 priests and three volunteers with a religious sister at the helm. In Hartford another person joined the "Faithful in Faith on Bike", another two in New Haven. In Stamford, the team grew by 13 in Brooklyn by 16, in Wallington by 8, and in Three Bridges the last pilgrimage joined the pilgrims.

- Compared to previous years, this year's cycling distance (120 miles from NY to PA) was more demanding. 7 days and 350 miles from Boston through five states MA, CT, NY, NJ, PA to the shrine of Our Lady of Częstochowa in Doleystown. It is a time of struggling with your own weaknesses, physical fatigue, heat reaching 100 degrees Farenheit and falling rain. The pilgrimage was full of wonderful testimonies of the faith of pilgrims and for many reasons it was important and needed. I was going to the Mother of God with the intention of helping to straighten family matters. I believe that the Mother of God will fulfill the desires of my heart. Thanks be to God - says Andrzej Zun, leader of the New York group.
Spiritual experiences and the goal of reaching American Czestochowa compensated cyclists for rainy weather, weakness and physical fatigue. 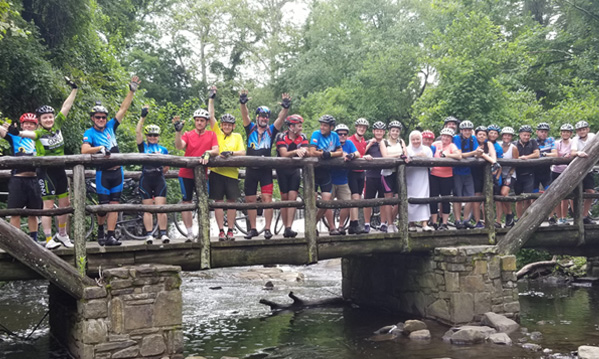 God gathered us for the 4th Interstate Bicycle Pilgrimage under the overwhelming protection of Our Lady of Częstochowa in the year of the Coronation of the Copy of Her Miraculous Picture in American Częstochowa. God intended to overcome in our hearts all our mundane impossibilities, discouragement, limitations and human weakness.

God called each pilgrim personally, by name, according to his ability to discover God's possibilities within himself, and gave Laska to realize this initial decision: I will go! It was not easy, because what is God's Work must be purified in the fire of trial and adversity. With the Rosary in hand, we covered each distance of the pilgrimage in brotherhood, we ate the Eucharist.

In humble prayer and with repentance in our hearts, we thank God for his work already the 4th Interstate Bicycle Pilgrimage from Boston to American Czestochowa. Let us boldly multiply the spiritual fruit of our cycling pilgrimage, so that next year it will be even more God's Glory on the east coast of the USA in Polish colors. 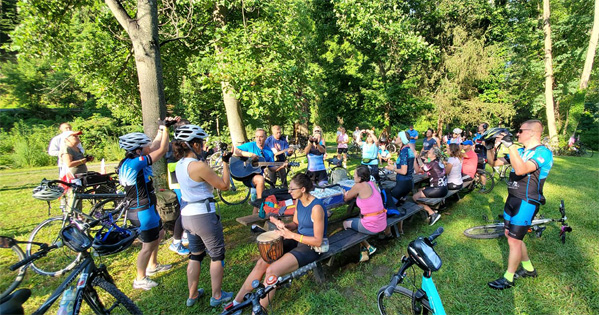 The 5th Interstate Bicycle Pilgrimage to the American Częstochowa "Faithful in Faith on a Bike" took place on July 17-19, 2020 under the slogan "Pro-Life on a Bike". Despite the pandemic, ban on meetings, communing in groups, basically closed churches and limited sacraments, we managed to organize it all, gather people for work, sponsors, volunteers, cars ...
The pilgrimage lasted only 3 days. Each of the pilgrims took their personal intentions to the spiritual capital of the Polish community in America. The time in the pilgrimage was filled with considerable effort, but also with solemn prayer. It was attended by cyclists from six states: New Hampshire, Massachusetts, Connecticut, New York, New Jersey, and Pennsylvania. The pilgrims from Stamford, Connecticut had the longest route - 138 miles.
The following groups met en route: from Stamford - 33 people, from Brooklyn - 25, from Wallington, NJ - 27, from Linden, NJ - 13, Three Bridges - 5. There were 9 volunteers, 5 priests: priest Włodzimierz Łaś SDS, Fr. Andrzej Waśko SDS, Fr. Sławomir Szucki, Fr. Tomasz Koszałka and Fr. Marek Wasilewski and one nun, Maria Dziuban. In total, 118 people participated in the pilgrimage including 56 women. 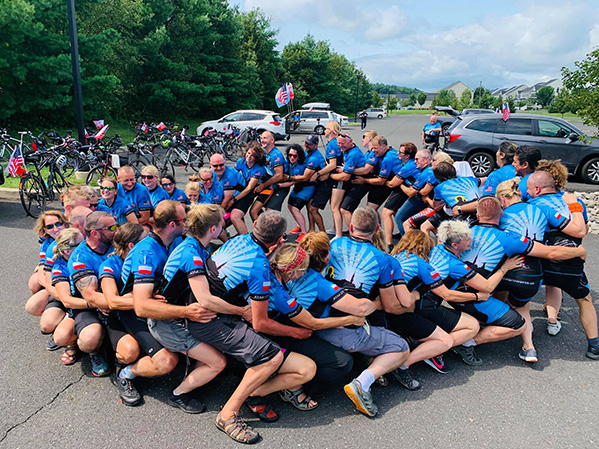 " SAINT JOSEPH, LEAD US ON THE STRAIGHT WAY TO MARY AND JESUS "

Sun, rain, high temperatures, fallen trees, punctured tires and a lack of a bridge were our daily bread. A broken chain is rare, but it also happens. It was not easy, but we managed.

We made it because we supported each other, and in fact, apart from the intentions that we had in our hearts, it was fuel for us to continue our journey. I was pleasantly surprised by the great good that literally flowed from everyone, pilgrims, clergy, and especially volunteers who were always one step ahead and behind us. With hot coffee, a cold drink, a muffin, or even a car driving in the rear all the time, to help if necessary. They were literally everywhere. We were genuinely grateful when someone packed away our luggage into the transport vehicle and it made its way safely to the next destination, someone prepared a meal, or washed the floor in the room where we were just sleeping. Volunteers are people who have devoted their private time and resources to be with us and be able to serve us. Just like that, humanly and from the heart.

Registration for the Pilgrimage 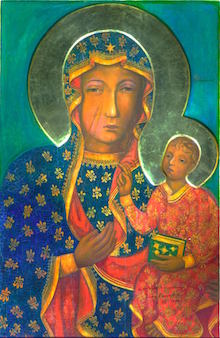 Beginning addresses of the pilgrimage

Most Sacred Heart of Jesus Church

The National Shrine of 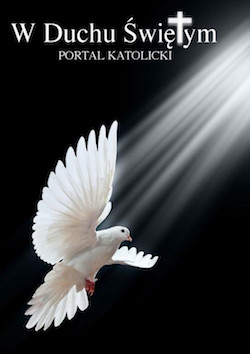 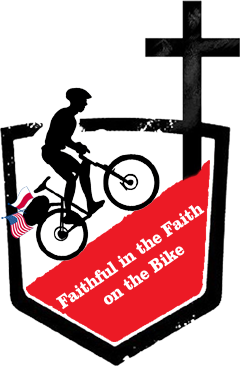 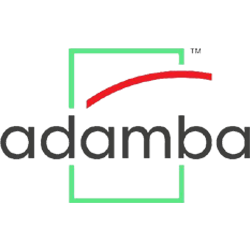 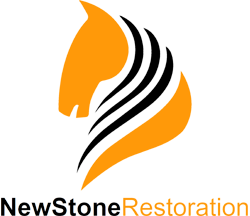 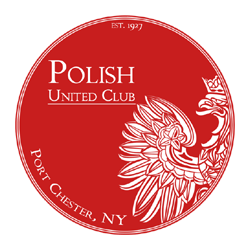 "Faithful in the Faith on the Bike"